You are here: Home / Archives for Scalby Fair 2020

You can download a PDF of the poster below (962k).

Further details regarding the programme and venues will be announced as soon as possible.

2020’s Scalby Walk will be hosted at The Plough, the very place the event started from 61 years ago.

Over the last six years, while The Plough was closed, the walk was hosted by the Nag’s Head. However, following the pub’s change of ownership, members of the Scalby Walk committee have decided it was time to bring it back.

Co-organiser Jamie Wallis said: “The walk started at The Plough and was held there many times. We’re grateful to the Nag’s Head for taking it on and allowing it to continue but now that the Plough’s got new owners we felt it was the right time to bring it back where it belonged.”

This year’s chosen charity is the Bradley Lowery Foundation. The Foundation is planning to build a holiday home for terminally ill children and their families on land off Burniston Road.

Tom Harrison, General Manager at The Plough, said: “We are absolutely delighted to be able to welcome back the Scalby Walk and support the Bradley Lowery Foundation.

There was a turnout of 120 for the 60th anniversary walk last year and the organisers hope to see a greater number of competitors in 2020.

The walk began in 1959 and started off as a bet between some of the older and younger regulars at The Plough. Among the well-known regulars was Frank ‘Sparky’ Sparks, who was always easily recognisable in his bowler hat and carnation on his jacket lapel.

The walk was originally for men only but women began to take part in 1961.

This year’s walk will take place, as usual, on Easter Monday, which this year falls on 13 April 2020. There will be a trophy for the individual and team with the best fancy dress.

As part of the event, there will also be a raffle with many donated prizes including a meal for four with a bottle of wine and a night’s stay at The Plough.

With thanks to the Scarborough News.

This year’s 61st annual Scalby Walk will be held on Easter Monday, 13 April.

We are delighted to announce that this year’s start and host will be returning home to where it all began…. The Plough Scalby !!

We look forward to a new, exciting chapter for the walk.

This year’s proceeds will be donated to the Bradley Lowery Foundation.

The committee of Scalby Fair is delighted to extend an invitation to you, or your organisation, to join us for this year’s 2020 Village Fair, to be held on Saturday, 20 June.

Each year we are generally visited by over 3,000 people, and we would be pleased to welcome you once again, or for the first time.

The Fair starts at noon and runs through to 4.30pm.

The charges for stalls are as follows:-

Please note that the Scalby Fair Committee runs a tombola stall, which is our main way of raising funds to contribute to the cost of the Fair and to support local good causes with any surplus. To optimise its potential, we need to control the number of other stalls offering this feature, so please ensure you confirm on the application form (see below) if you would like to offer a tombola activity on your stall. You will be advised if this is acceptable or not. And as a way of sharing the profits that such an activity can bring, we will charge double the above prices if you do run a tombola on your stall.

Each year we have a theme for the fair and this year sees 100 years since the Roaring Twenties, so lots of opportunity to enter in to the spirit of the day by decorating your stall, and dressing yourselves. The Twenties saw the flappers and the birth of Jazz. To encourage participation, prizes will be awarded for the best dressed stalls as follows:  First (£50), second (£30), third (£20), and fourth (£10). Good luck!!

Thank you in anticipation of your support and we look forward to seeing you on Fair Day.  For further information on this year’s fair and on past fairs, please explore our website

You can download our Scalby Fair Stallholder Application and Booking Form here as doc.x file (457k) or as a PDF file (116k).

Our Scalby Fair theme for 2020 is “The Roaring Twenties”.

Stalls and pitches availability will be announced soon.

Image by Annalise Batista from Pixabay 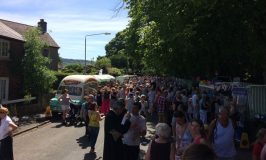