Scalby Charity Walk has been taking place since 1959 and takes place each year on Easter Monday.  Scalby Fair organises the walk which starts from the Nag’s Head.

The Walk is a circular route between Scalby and Cloughton, involving the partaking of liquid (alcoholic or otherwise) in several pubs. The Walk is marshalled until 2pm – walkers have occasionally been known to become “lost” in one of the pubs!

All proceeds go to a chosen charity. In the past the Walk has raised £2,250 for the YMCA, £1,650 for Ellies Brain Tumour Trust  Fund, and £1,300 for Scalby Cricket and Football clubs. Many other charities, including St Catherine’s Hospice, have also benefited.

In 2019 the walk celebrates its diamond 60th anniversary. We are proud to have nominated Scarborough Dial-a-Ride as our nominated charity in the anniversary year. Over the years the walk has raised thousands of pounds for a diverse range of charities, such as the Teenage Cancer Trust, YMCA and St Catherine’s Hospice.

Foremost in our goals is to put on an event that fosters community spirit brought together in friendly competition. You don’t have to be a resident to take part and people come from all over the country to join in. Each year the residents of Scalby, Burniston and Cloughton have taken part in a 7-mile walk (no running!) through all the three villages where all the participants must consume a half of bitter, lager or soft drink in the four pubs en route: The Three Jolly Sailors, the Red Lion, the Blacksmiths Arms and the Oak Wheel.

Over the years the walkers have dressed up in a variety of fancy dress costumes, and what is a bit of fun is also a challenge with trophies to be won, and family members competing with each other to achieve the best time. Others meanwhile have been known to ‘get lost’ in some of the pubs!

The walk began in 1959 and started off as a bet between some of the older and younger regulars at the Plough, Scalby. One of those was well-known Plough regular, Frank ‘Sparky’ Sparks, who was always easily recognisable in his bowler hat and carnation on his jacket lapel. Jack Jordan was landlord of the Plough then, and in the first year it was only men, and women began to take part in 1961. One of those first ladies was Margaret Scarfe, Scalby Postmistress from 1967-1994. Margaret was a regular walker for many years. Another regular was the late longtime vicar of St Laurence’s Church, Scalby, Canon Chris Tubbs, who always wore his white cricket jumper!

If you can help us identify those shown in the above images, we’d love to hear from you. 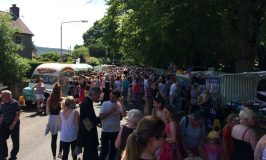